Pioneers Cultivating Black Pearls in a Sea of Fog

Pioneers Cultivating Black Pearls in a Sea of Fog

A 320 meter high hilly land dominating the Miyoshi Basin. The vineyards are spread out; surrounded by beautiful wilderness. Miyoshi Pione is a brand of seedless grapes that has been grown here for over 40 years. In Hiroshima prefecture it’s one of the most popular gifts. 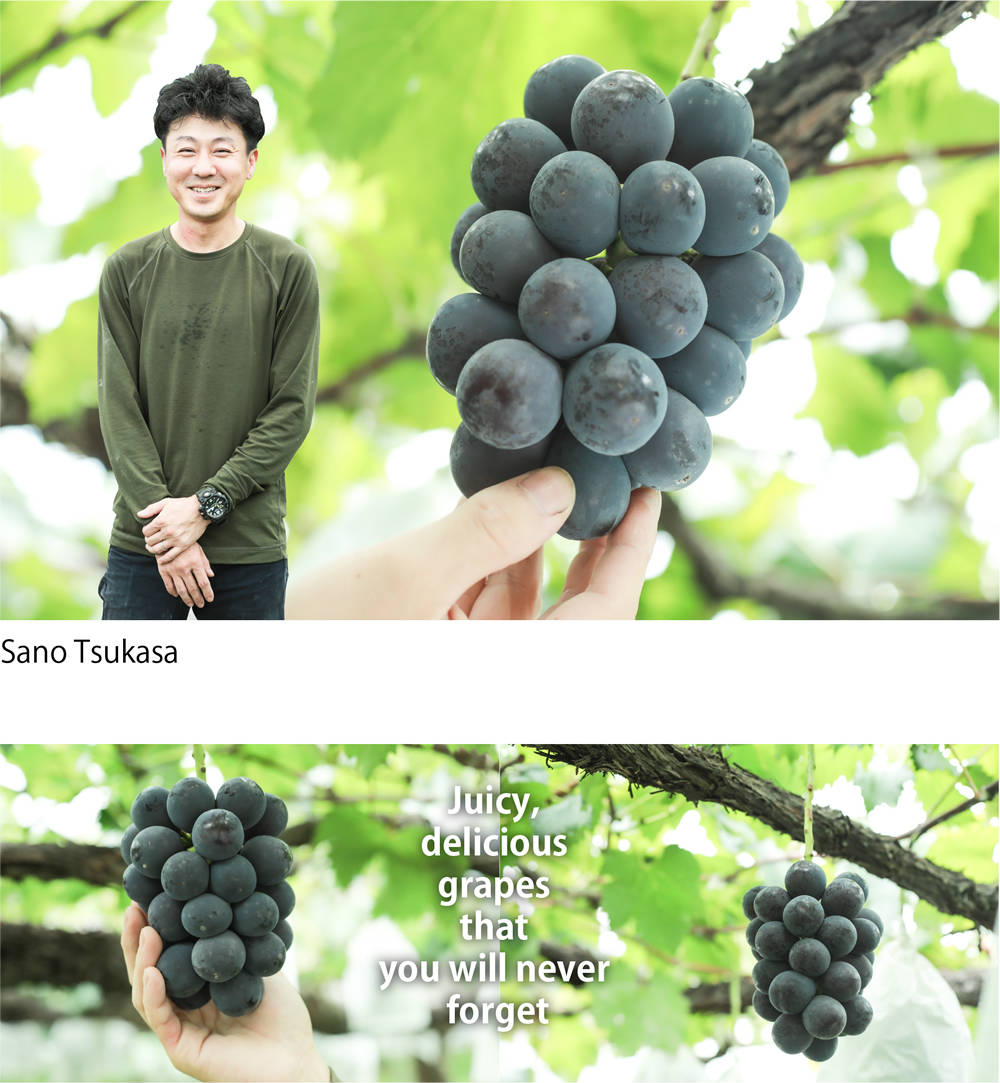 Crossing two breeds of grapes, Cannon Hall Muscat and Kyoho grape, Miyoshi Pione became one of the best grapes. As the vividly colored large grapes are said to be “black pearls,” the more perfectly deep black even when looked through in the light, the better they are. A single bunch of these grapes are pretty heavy, and each fruit is almost ready to burst. They have a lot of juice with the right combination of subtle sweetness and refreshing sourness. Once eaten it you’ll never forget the taste that makes you want to keep them all to yourself. Surrounded by three rivers; Gounokawa river, Basen river and Saijo river, Miyoshi is an island basin known as the foggy village. The difference in temperature between daytime and nighttime that produces fog is one of the reasons for the tastiness of the grapes. Sano Tsukasa, a member of Miyoshi Pione Production Association says, “The difference in temperature between day and night produces grapes that look even darker with a high sugar content.” 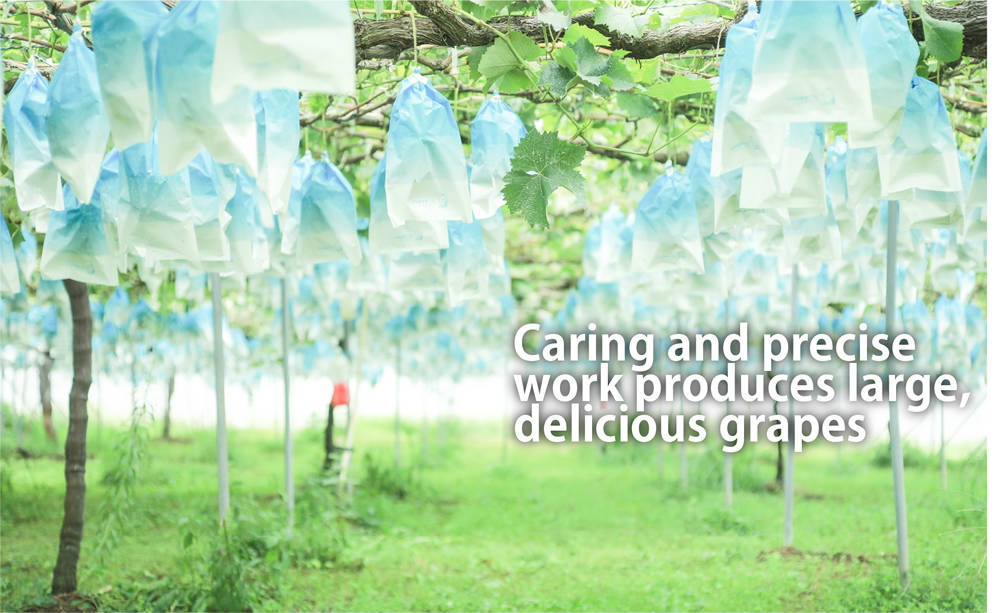 Sano has been involved with wine culture for about 11 years. When he was 25 he came back to his hometown in Hiroshima and helped his brother run a vineyard where he decided to take on wine culture as a profession. Grapes are sweet and delicious, but what is most important for evaluation is shape; The bunch is a perfect inverted triangle no matter which angle and each grape is the same size. “There is a process called ”berry thinning” where you pull grapes to make the shape better when they are full grown, what is interesting is that when the grapes are grown they reflect the personality of the worker.” Pruning, guiding and trimming bunches are done only once a year, so every judgement affects the result. Caring and precise work produces large, beautiful and delicious MIyoshi Pione.

Starting 40 years before the system of Pione growing was clarified, Miyoshi has a long history of it. Miyoshi Pione Production Association was founded by 24 farmers in July, 1974. Now 19 members are working on cooperative work in wine culture. When the grape was first marketed it was generally nameless so it was difficult to find a market. However, by improving growing techniques with will and passion and steady advertisement by members of the association led the grape to become one of the best gifts in Hiroshima. From the middle of July to the middle of October, its direct sales store is so popular, that sometimes they sell out before noon! The grapes sold in a cup at local supermarkets also shouldn’t be overlooked. They are only 500 yen, which is suitable for a snack.

The Harmony of Nature, People ...

A Gentle Cafe full of Tenderne... 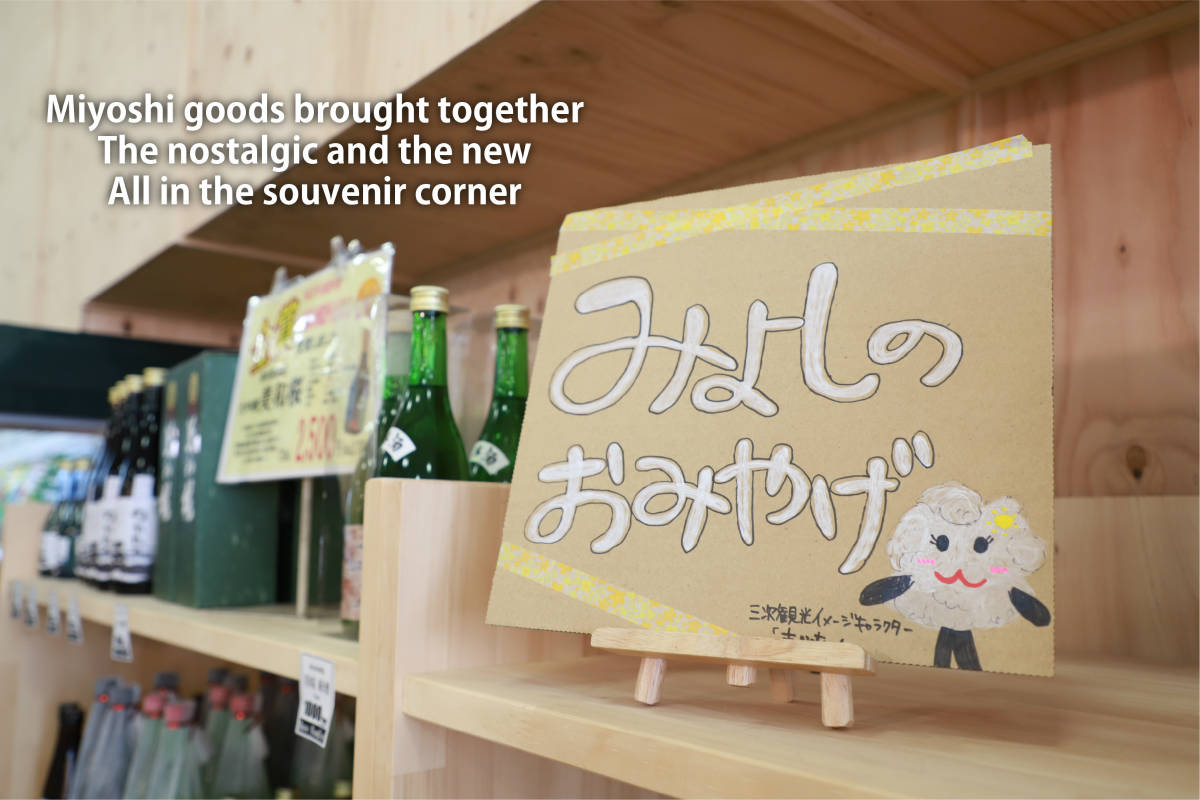 An Interesting Display That Ch...